★ Welcome to the Dirty Players Series! ★ 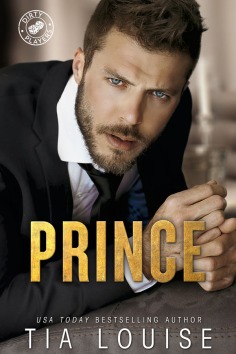 Rowan
I’ve only ever cared about two things: Racing cars and being king.
Despite what my younger brother says, there’s more to life than chasing skirts.
Until she walks into the room.
Dark hair, luscious lips, gorgeous curves…
Ava has every part of my body standing at attention.
She consumes my thoughts, my desires… I will possess her.
I’m the future king, dammit.
If only her sister would get out of the way.

Zelda
It was a simple job, in and out.
Seduce a crown prince, humiliate him in front of his people, get out of jail free.
Finally, I would keep my promise to my sister: Ava would be safe.
I never saw the tables turn.
I never saw him coming.
Cal was only looking for a party… Until he found me.
He’s the “playboy prince,” the brother of my target, the object of my lust.
Ripped, lean body, talented fingers, talented tongue. He’s wickedly smart and completely irresistible.
He’s ruining my job… he’s ruining everything.
Now I’m staring down the barrel of a gun, and I have only one choice… RUN.

(PRINCE is a thrilling action-adventure romance full of twists and turns and smokin’ hot sexytimes. It is Book 1 of the “Dirty Players” series, formerly titled THE PRINCE & THE PLAYER. No cheating, but you do have to keep reading… Let the games begin.) 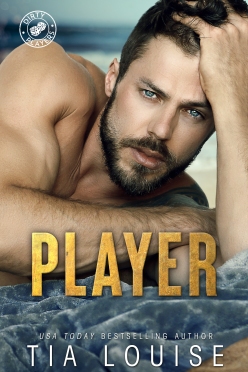 Cal
She ran.
She lied to me. She almost killed my brother.
She stole her way into my heart… and then she ran.
Zelda Wilder’s got another thing coming if she thinks I won’t go after her.
She is mine, and I will bring her back… to justice, and to my bed.

Zelda
It took everything I had to walk away, but staying put us all in danger.
I’m a player, a fighter, a survivor. I know when it’s time to go.
I’ve never trusted a man to protect us… but I trusted him.
Now I can never go back—it’s far too dangerous. I have to keep running; I have to stay hidden.
I should have known the “playboy prince” wouldn’t go down without a fight.
I should have known Cal would find me.
I should have known you can’t play a player.

(PLAYER is a thrilling action-adventure romance full of twists and turns and smokin’ hot sexytimes. It’s Book 2 of the “Dirty Players” series, formerly titled A PLAYER FOR A PRINCESS. No cheating. No cliffhanger. From the Mediterranean to the Caribbean, the game continues…)

Logan
I’m the king’s guard, military elite, licensed to kill.
Getting too close to a target is never allowed.
My orders were clear: Take a break, clear my head, get back to work.
It’s what I was doing when she walked into the bar…
Long blonde hair, sassy mouth, wicked smile.
She’s a far cry from the quiet little bookworm I fell in love with years ago.
But when I touch her, our chemistry fires hotter than ever, and when we kiss…
Let’s just say, you never forget your first.

Kass
I have good reasons for the choices I’ve made, forces I can’t control…
Bumping into Logan in a bar is a curveball I don’t need.
I was a girl when I saw him last. Now I’m a woman, and my life is a dangerous game.
But he won’t let me go, and I can’t deny the heat between us.
Six-foot-two, ripped muscles, so cocky and bossy… So sexy.
He makes my knees weak, but I’m not the sweet kid he left behind.
I’m a dirty dealer, and I can’t fall for him twice. 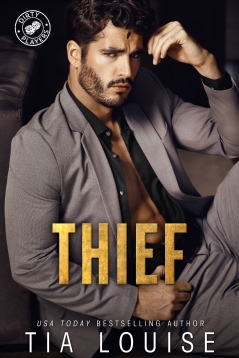 Ava
When I was young, I stole to survive.
I lived on the streets. I didn’t have a choice.
Everything changed when I fell in love.
My husband is a brooding, sexy, dominating alpha.
He’s a king, and I left behind my life of crime to be his wife.
Now I live in a palace. I have everything I could ever want.
But old habits die hard…

Rowan
Before Ava, I only cared about two things: Fast cars and being king.
Then she appeared with long, dark hair, full lips, and sensual curves.
She grew up a thief, but I gave her my heart.
I gave her my name.
Our life is straight out of a dirty fairytale…
Until she steals something I can’t replace.
Her target demands her recompense… or her life.
This guy doesn’t know who he’s dealing with. 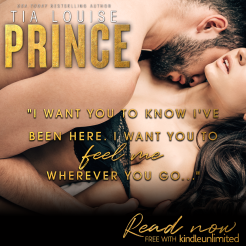 PLAYER by Tia Louise from Book Obsession Production on Vimeo.

Reaching up, I trace a finger along the line of his jaw, thinking how this might be the last time we’re together. It’s a sad thought, I decide to put out of my head.

“Yes,” I say softly, and in that moment, the space between us disappears.

His mouth covers mine, pushing my lips apart. A little whimper squeaks from my throat as our tongues curl together, and I hold the lapels of his coat. Warm hands are again on the bare skin of my waist, but this time, his thumbs slide in the front of my dress, sliding up the skin of my stomach. I groan as the bell rings, and the elevator stops.

“I’m ready to get you out of that dress,” he says, taking my hand and pulling me out of the shiny mirrored box to the gleaming entrance of the suite.

“Dom Pérignon?” I read on the plaque.

“I told you,” he slides the card and the door opens. “Lots of champagne.”

We stop just inside the door for another kiss, and as it closes, I feel his fingers working behind my neck, sliding the zipper down the back of my dress. His lips chase mine, and my top falls to my waist, revealing the pink satin demi-bra that only covers the lower half of my breasts. My nipples play peek-a-boo over the tops of the lace edges.

“Jesus, it just gets better,” he groans deeply, leaning down to cup the bottom of one and pull my beaded nipple between his lips, soaking the lace.

The sensation registers directly between my thighs, and I let out a little moan, threading my fingers into the sides of his hair.

“To match those panties… Oh, right,” he teases, with a wink.

With a flick of his wrist, his bow tie is undone. Coat off, he unbuttons his top two buttons followed by his cuffs, never taking his eyes off me. I shiver at the darkness brimming in his eyes.

“Take off your dress,” he says in a low voice, as he pulls his shirt over his head, exposing his lined chest.

I reach down to unfasten my heels, and he stops me. “No, leave those. Just the dress.”

Straightening, my back is still against the wall, I hook my thumbs in the sides of my skirt and shimmy it over my hips. It lands on the floor in a soft thump around my heels, and I step out. Cal stops moving, and I’m sure I’ll burst into flames at the look in his eyes. Those hazel eyes move from my breasts, down the line of my stomach to my bare pussy, down my legs to the gold, strappy heels. I see his Adam’s apple move once before he steps forward, catching my face roughly in his grip and pulling my mouth to his.

Once our lips collide, his other hand moves straight between my legs, cupping me, plunging two fingers deep inside. My gasp of shock and passion disappears in his mouth. I’m grasping at his arms, his shoulders, my nails scratching his skin.

“Come with me,” he says, his voice low and thick.